What's the Hold Up? Why Some Consumers Don't Use Payment Options 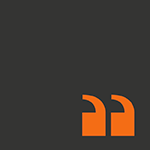 Concerns about security and a desire to pay the same old way are keeping some from making the most of payment options.

According to recent findings from the Fiserv quarterly consumer trends survey, Expectations & Experiences: Consumer Payments, security, complacency and a general lack of interest are some of the most common barriers to using various payment options.

The survey, conducted online by Harris Poll among 3,031 banking consumers in the U.S., found that while 75 percent of consumers use online banking to access their accounts, some consumers don't take full advantage of services like mobile banking, person-to-person payments (P2P), e-bills and digital wallets.

What's behind the hesitation? 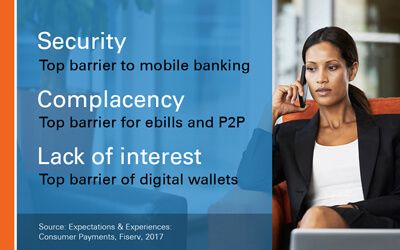 Security concerns are by far the most common barrier to mobile banking use with 51 percent of nonusers saying they would be worried about the safety of accessing their financial information through mobile devices. Other concerns, such as preferring to use a computer (42 percent) and the screen not being large enough (22 percent), lag far behind.

The news is quite different for P2P. Security actually declined significantly as a concern for nonusers of P2P – only 21 percent of nonusers cited it as a concern, down from 29 percent a year ago. It's possible that as adoption of P2P increases – up 36 percent from last year – more consumers may have a better understanding of what the service is and how its security features work.

Some Consumers Are Set in Their Ways

According to the survey, complacency is a factor for nonusers of both e-bills and P2P. E-bill nonusers most commonly say a lack of desire to change their current process (42 percent) is why they haven't used the service.

Similarly, 49 percent of nonusers of P2P say they prefer traditional ways of making payments – checks, cash or cards. This finding is more common among older consumers, with 54 percent of those 52 and older saying they prefer analog methods, while 40 percent of people ages 18–51 say the same.

As Growth Continues, Financial Organizations Have an Opportunity to Address Barriers

Even so, barriers to adoption exist across generations and many are addressable. The decline in security concerns around P2P could mean that increased awareness of P2P and its features has led to a greater understanding of security issues. Addressing similar concerns for mobile banking could simply be a matter of more tailored marketing messages and consumer education.

Likewise, complacency issues and a lack of interest could be countered with clear, well-timed communications on the value proposition of e-bills and P2P. And, with 76 percent of consumers saying real-time payment delivery is at least somewhat important, financial organizations could find that the promise of instant credit for payments boosts adoption.

Put simply, giving people the information they need and the features they want could completely change their point of view.

The survey was conducted online within the U.S. by Harris Poll November 7–30, 2016. A total of 3,031 interviews were conducted among U.S. adults ages 18 and older who met the following criteria: Someone in the household currently has a checking account with a bank, credit union, brokerage firm or other financial organization and has used their checking account to pay a bill or make a purchase in the past 30 days. The data was weighted to ensure that relevant demographic characteristics of the sample matched those of the U.S. General Population. All respondents (not only those who met the qualifying criteria) were weighted to U.S. Census Bureau demographic profiles for the U.S. population, age 18 and older on education, age, gender, race, income, region, marital status, employment status, household size and number of hours spent on the internet.