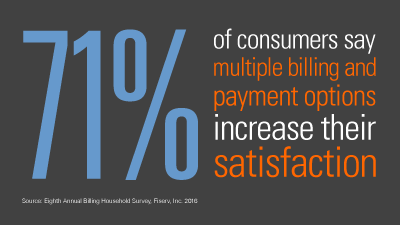 What makes people happy with their billers? According to the Eighth Annual Fiserv Billing Household Survey, offering a variety of ways to receive and pay bills leads to greater satisfaction with billers. In particular, consumers like digital methods that provide increased security and allow them to go green, reduce clutter and manage their finances.

What Billers Need to Know

Multiple billing and payment channels, along with e-billing and the ability to view/pay at a bank's site, are inextricably linked to customer satisfaction, according to the survey. There are no workarounds: Consumers want options. Make safe, fast and convenient options available – delivered where and when people need them – and satisfaction and loyalty will follow.