It's common to hear that members of younger generations have drastically different behaviors than their older counterparts. That's an easy assumption to make in financial services, but it's not necessarily true. Expectations & Experiences: Consumer Payments, the Fiserv quarterly consumer trends survey conducted by Harris Poll among 3,048 banking consumers in the U.S., found that across age groups, people often use services in similar ways. 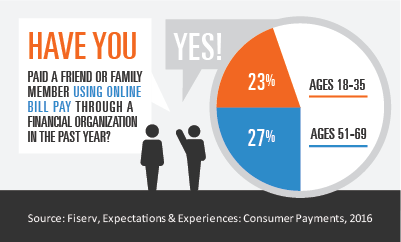 "Millennials and baby boomers are, of course, at different life stages, but the results show that when it comes to the way they use financial services, they have striking similarities," said Steve Shaw, vice president of strategic marketing, Digital Banking, Fiserv. "Understanding exactly where and how the similarities and differences occur can help financial institutions appropriately target their attention and messages when seeking to engage these generations."

Similarities in Channel Usage and Satisfaction

Millennials report using certain services more than boomers did in the last 30 days, but the ranking of most- to least-used services is the same.

Among those who use mobile banking, in the past 30 days:

In some cases, generations aren't all that far off in terms of what they don't know about financial services. For example, 37 percent of millennials don't know if their financial institution offers person-to-person (P2P) payments – and 47 percent of boomers say the same. That's a statistically significant difference, of course, but not as large a disparity as might be expected.

Adoption Is Where Generations Differ

The meaningful differences between generations come in the adoption of services. In the last month, millennials are more than five times as likely as boomers to have used P2P (32 percent versus 6 percent) and more than twice as likely to have used mobile banking (76 percent versus 22 percent). For more established services like online banking, the gap between users and nonusers shrinks considerably. In fact, 81 percent of millennials used the service in the last month, alongside 64 percent of boomers.

While it is clear there are some differences between generations, they don't exist across the board. The key takeaway? The adoption curve might be a little steeper for one generation over another, but once it's overcome, people of all ages will make the most of the services available to them.